We have learned from six prior trips that boys this age aren't really interested in staying in a city too long. They're ready to move on and check out the next place. And while we hope these travelers will be able to get back to Europe as they grow older, for some this might be their best opportunity. So we will squeeze in as much as we can in our time in Europe to give them at least a taste of the life and culture of a small slice of the continent.

The countries and cities listed here could have slight variations by the time we leave. Activities listed are those we're planning at this time. Any changes will be noted here so check back. Things happen that we can't control and we will have to make changes to adapt. But no matter what, the activities we'll do are all amazing opportunities.

In most of our cities we'll take either a walking tour with a guide or a bus tour with either a guide or recorded tour notes. Some tours might be by boat.

The activities listed are those we've experienced on past trips and are representative of the types of activities we'll be experiencing. We will be fine tuning our program as we get closer. Some activities might have restrictions or be closed for any of a variety of reasons when we're there. But for sure, we will do and see amazing things. 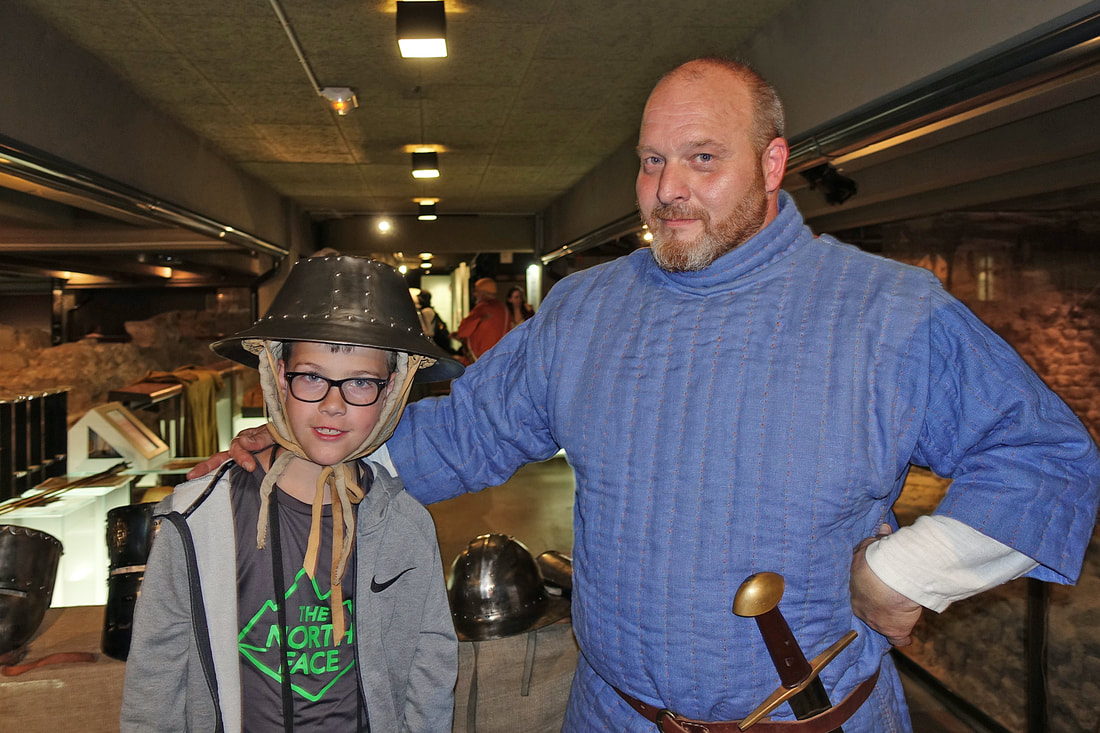 La crypte archéologique at Notre Dame Cathedral displays hundreds of years of French history at this site which was discovered when work crews were excavating the area.

You might think of waffles or chocolate when you think of Belgium, but needless to say, there's a lot more to see and do than that. The train from Paris to Brussels takes about three hours, so we'll be there in plenty of time to get busy with exploring. In Brussels we'll have dinner in the area of the Grand Palace, the site of Brussels market place for over 1,000 years. And we might as well visit the Belgian Chocolate Village. While Brussels has plenty to do, we'll actually spend the second full day in nearby Bruges. This city has been designated a UNESCO World Heritage Site. It's a delightful small city with lots of history.

It's fun to walk up the tower of the 272-foot Belfort (Belfry) to get a bird's eye view of the city. Those 366 steps will be worth it. The Markt (Market Square) is amazing. We'll take a boat tour on the canals that criss-cross this city. We'll pay a visit to Onze-Lieve-Vrouwekerk (Church of Our Lady) where you'll get to see Michelangelo's masterpiece sculpture Madonna and Child. This statue has always been famous, but Americans recently became aware of it when the movie Monuments Men was released. You should watch this film before our trip. It's about an Allied group during WW II whose job was to find, recover, and rescue important European art pieces before they were destroyed by the Nazis. This statue had been stolen and...well, go rent the movie. 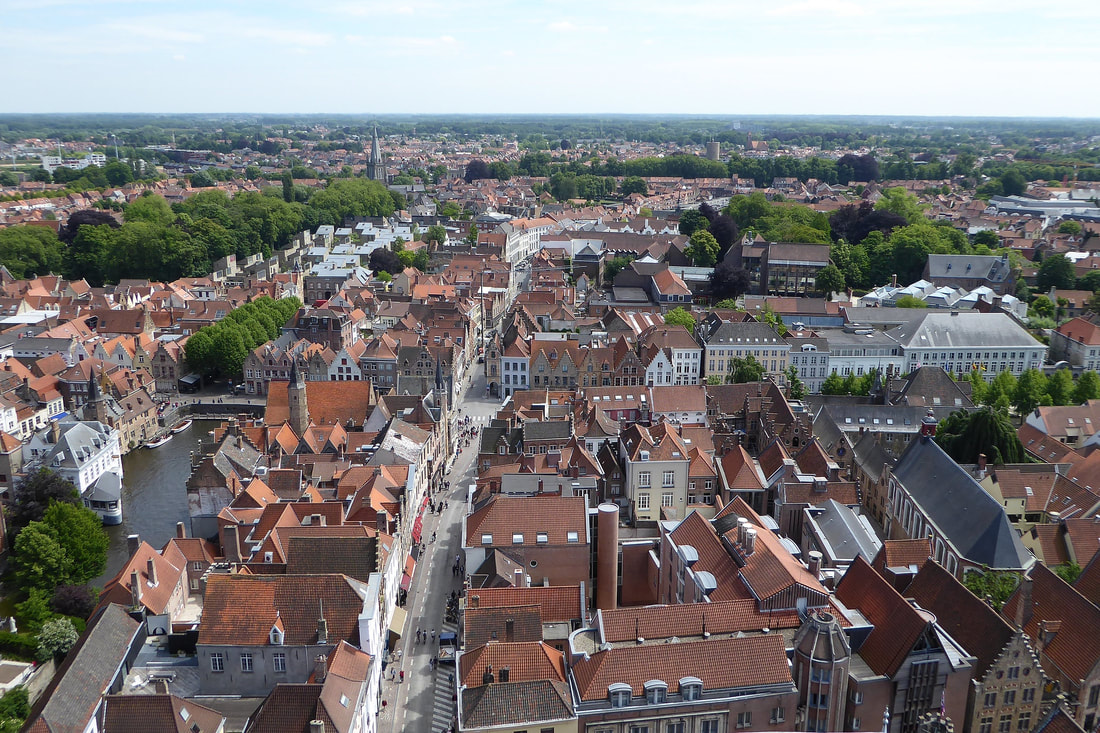 View of Bruges from atop the Belfry which you'll have to climb to have this opportunity.

It's hard to describe Amsterdam, but for sure...it's different! That's an understatement. It's a very easy-going city though you must be cautious of bicyclists. Since Amsterdam is downright flat, it's easy to get around on a bike and just about everyone does. You'll see bike parking garages where you'll wonder how people ever find theirs again. Surely, some don't. This city, like Bruges, is known for its canals. if we're lucky, we'll get to hear about the marvel of technology that prevents this city from flooding on a regular basis.

Amsterdam has incredible first-rate museums and a world-famous raunchy side as well. It's seems like a strange combination. But Amsterdam is a world-class city. Some of our highlights will include a docent talk and self-guided tour of the Anne Frank House. You should read about this part of history if you're unfamiliar with it. We might take another tour of the canals if you're up for two boat tours in a row. You'll enjoy an afternoon at The Heineken Experience, which is, as you can imagine, about the famous beer. You might even get to see their own version of the Budweiser Clydesdales. We will enjoy a fun comedy show at Boom Chicago. This is an improvisation theater where performers act out suggestions from the audience. It's got Chicago in its name because the original founders were members of the famous Second City improv group in Chicago. Don't worry, the show is performed in English.

We will take a day trip from Amsterdam to The Hague. Just under an hour away by train, we'll get to visit another classic city in the Netherlands. The Hague is the seat of Dutch government and has been since the 16th Century. Who knows? We might even see the Dutch Royal Family. (Okay, that's a stretch). There is actually a beach here on the North Sea. Might be a little chilly for a dip, but you never know. We can take the large Ferris wheel for a spin. We'll get a glimpse of The Binnenhof, the oldest parliament building still in use in the world. It was originally constructed in the 1200s. We'll plan to visit the Madurodam Model City, a huge scale model of parts of The Netherlands in 1:25 scale. And if there's time, maybe we'll drop by The Prison Gate Museum which used to house people who had committed atrocious crimes as early as 1420. 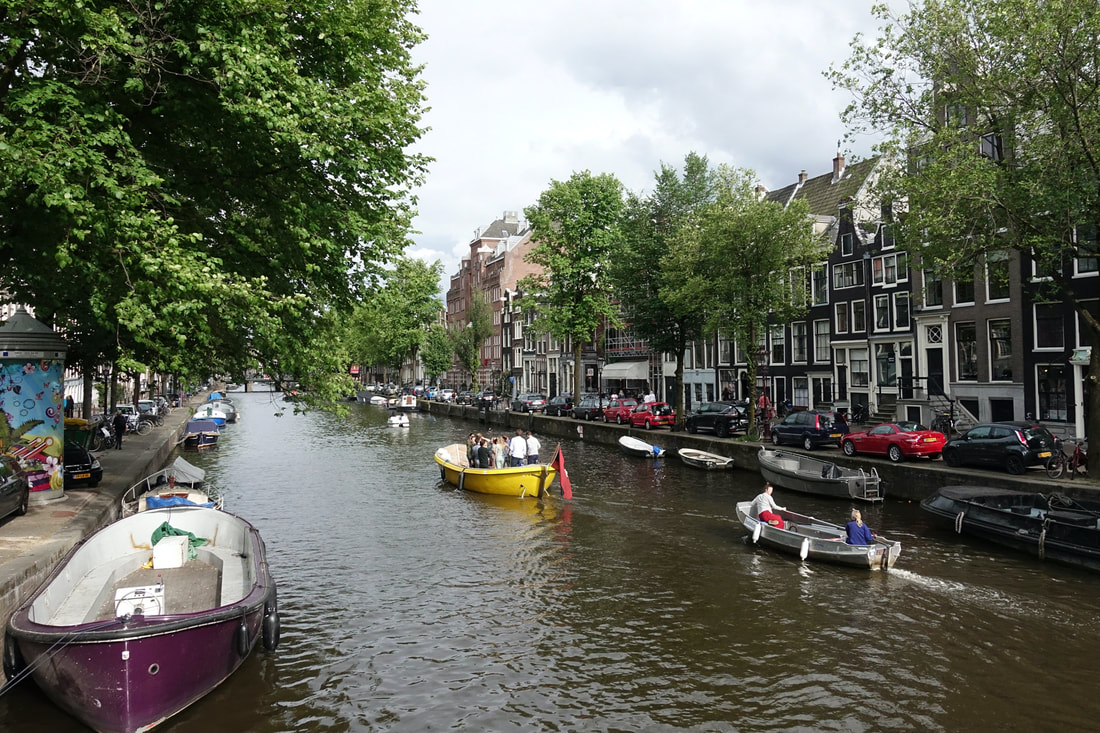 Amsterdam is a city of canals. You'll love seeing all the varieties of boats moving up and down the water. It's also fun to see the houseboats moored along the banks.

We won't have a lot of time in Heidelberg. We've set it as a "stopping off" place as we move from the flat areas of Europe to the hills and mountains region. It will be a long train day (the longest of our trip) as we make the move, but time will pass quickly as you can watch scenery, chat with friends, grab something to eat, and move about. We'll get to the city with plenty of daylight left and we'll take in at least a couple of interesting sites. You should note that Heidelberg was a rare city in Germany that escaped bombing by the Allied forces in WWII. Much of the city is still very much like it has been for centuries. We'll definitely visit the Altstadt (Old Town) and Marktplatz (Market Square), and perhaps we can drop off a few at Studentenkarzer (Student Jail).

Bern is the capital of Switzerland and in this country we'll be switching from euros to the Swiss franc. We'll spend our two nights here in an International Youth Hostel which was completely refurbished just a couple of months before our last visit in 2018. It's located just blocks from the Swiss capitol building. It's a steep downhill climb to the hostel which means it's even steeper getting back up. But we've got it made. There's a funicular that will take us both ways. A funicular is kind of like an elevator but on an incline. We'll explore the Old City, walk along the Aare River, and take in Barenpark where we'll see a few European bears. The bear, by the way, is the symbol of Bern...hence the name.

The real highlight of our two days in Switzerland will be our day trip to the alpine village of Grindelwald. We'll take an easy train from Bern to Interlaken and then switch to a "tourist" train that will take us into the Alps. In Grindelwald we'll take a gondola up the mountain for lunch. Then you'll decide how to get back down. Everyone gets to hike part of the way. After all, don't you want to say you went hiking in the Swiss Alps? But then you'll choose a couple of methods of getting back the rest of the way to Grindelwald. You could always hike the rest of the way or take the gondola. But the other options are a bit more fun. They include scooters and giant tricycles...all using gravity to make it home. There's also the First Flyer (First is the name of the stop where we'll have lunch), the Eagle Glider, and everyone can enjoy the Cliff Walk over the gorge for a breathtaking view. This will be a grand day. 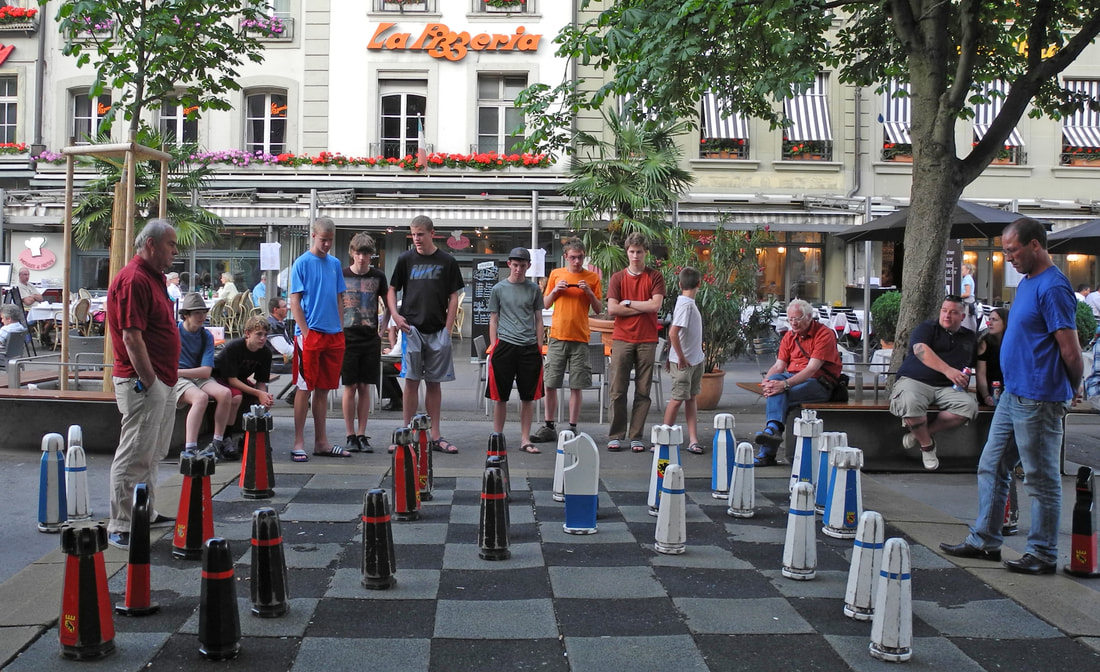 Giant chess in the market in Bern. 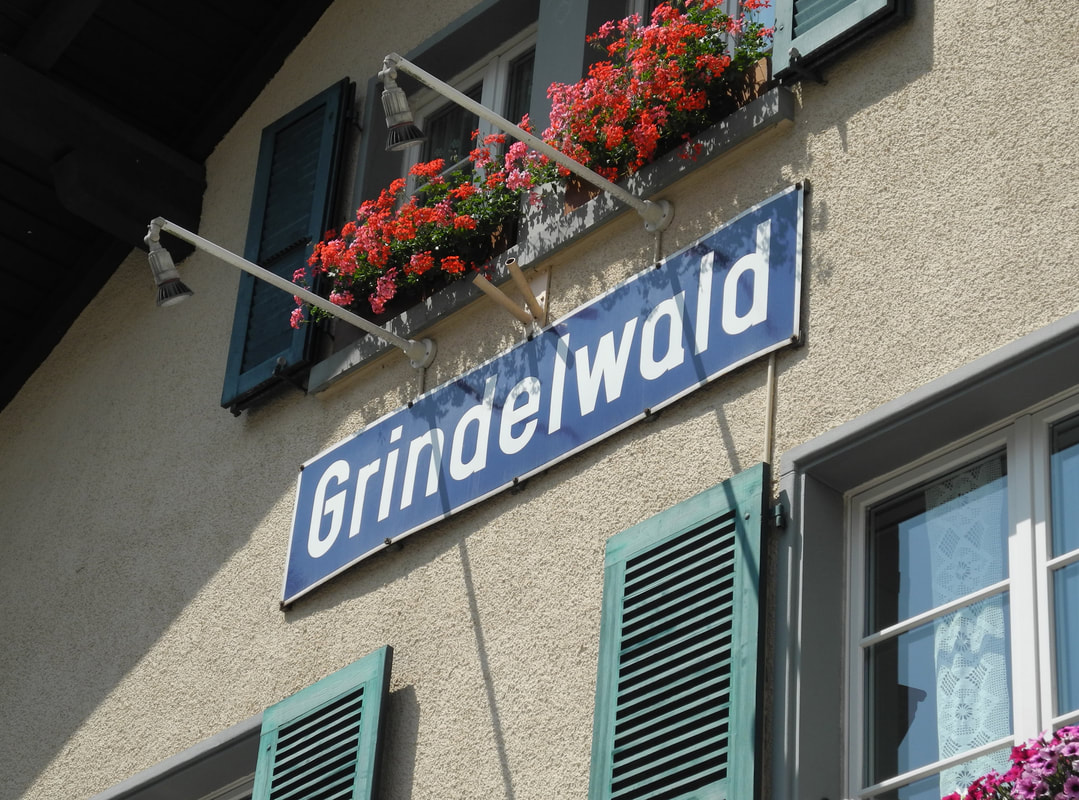 Sign on the train station announcing our arrival in Grindelwald.

From the Swiss Alps to the Austrian Alps, we'll be enjoying more gorgeous scenery in the alpine region. We'll enjoy our visits and dinners in the Altstadt von Innsbruck (Old Town). It's a wonderful place to explore. We'll take a series of cable cars up high above the city to get a great view and from there hike up even higher. On the way down we'll stop by the Alpenzoo, the highest in elevation zoo in Europe. Another highlight of our Innsbruck stay will be getting to take a ride down the slopes in a summer bobsled. These runs are the same ones used for Olympic training events during the winters, but in the summer special bobsleds are fitted with tires and you'll get to experience 2g-forces as the bobsled speeds through 14 turns at 100 km/h. That's 62 miles per hour in a bobsled - the adrenaline will be pumping. Each bobsled will be piloted by a professional driver.
​
We will take a day trip to Salzburg and might even visit the birthplace of Amadeus Mozart. Salzburg might be best known to Americans as the setting for much of the film and musical, The Sound of Music. We might happen upon a couple of sites used in the film and can understand if you break out in a rousing rendition of "Do- Re-Mi." For sure we'll visit Fortress Hohensalzburg Castle. It's the fortress that sits high overlooking the city and provided protection for centuries. Another fun stop in Salzburg is the Spielzeugmuseum (Toy Museum). 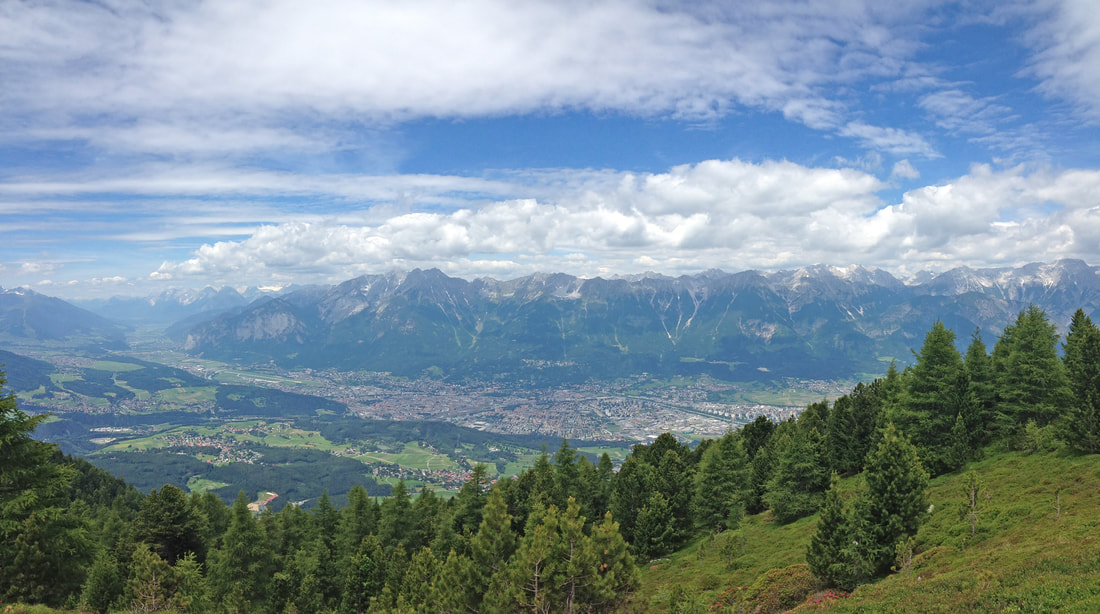 View of Innsbruck from a hike in the Austrian Alps. 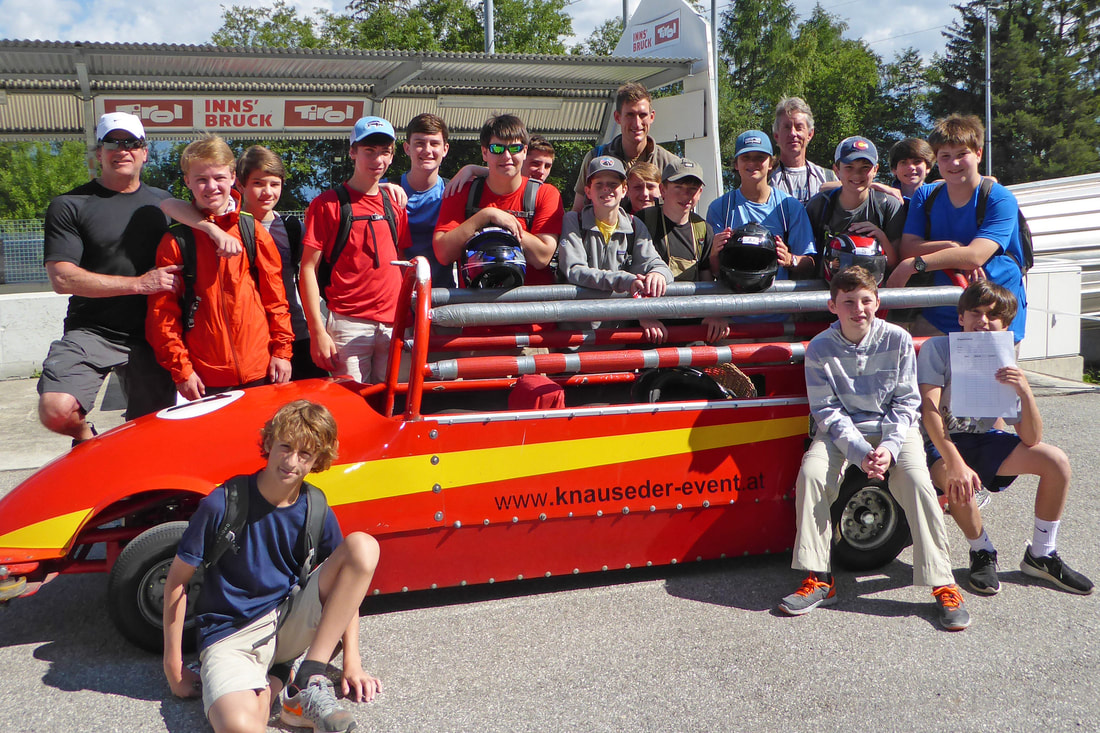 The ride down the bobsled track will be something you won't forget. 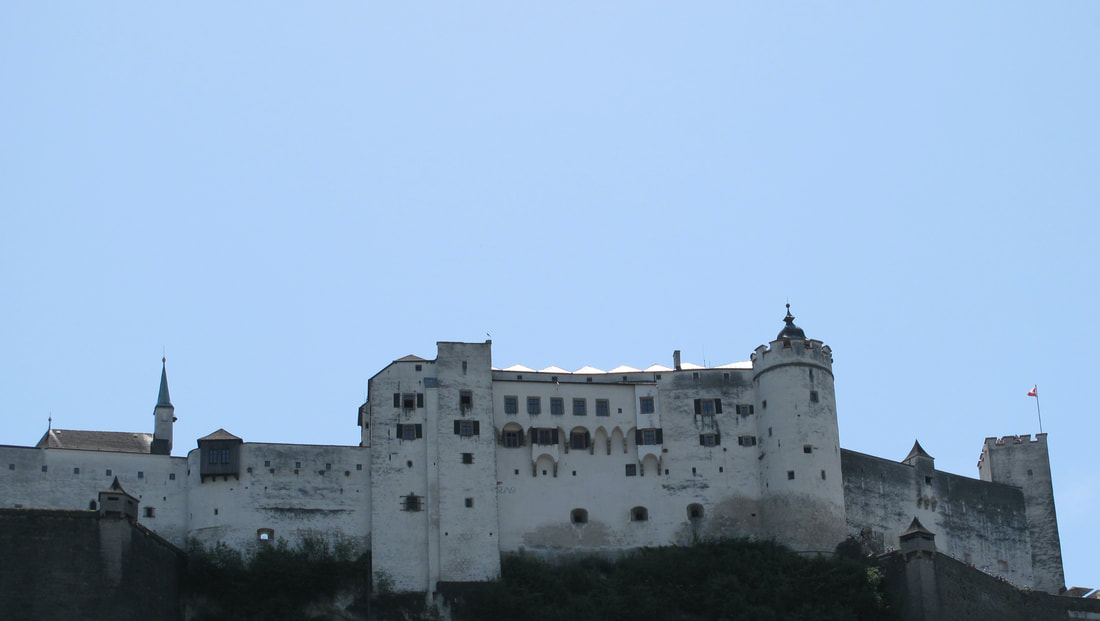 We'll finish our stay in the Bavarian region of Germany. Some of the activities will including a walking tour, a couple of visits to the main old town square (Marienplatz) which is where we'll find dinner one evening at the famous Hofbrauhaus. We'll explore the huge English Gardens and possibly catch some surfboarders surfing mechanical waves. The BMW Museum has always been a popular attraction with our boys. We might stumble upon the makeshift Michael Jackson Memorial which is an interesting find. We'll visit Olympiapark, home of the 1972 Summer Olympics and take a ride up the tall tower giving us a view of the entire region. We will probably return to the Deutsches Museum (science and technology exhibits). On a somber note, we'll have a guided tour of Dachau Concentration Camp Memorial Site. The Dachau Concentration Camp was liberated by American forces in April 1945.

We will choose one city for a day trip from Munich and that is still being discussed. Check back for updates. 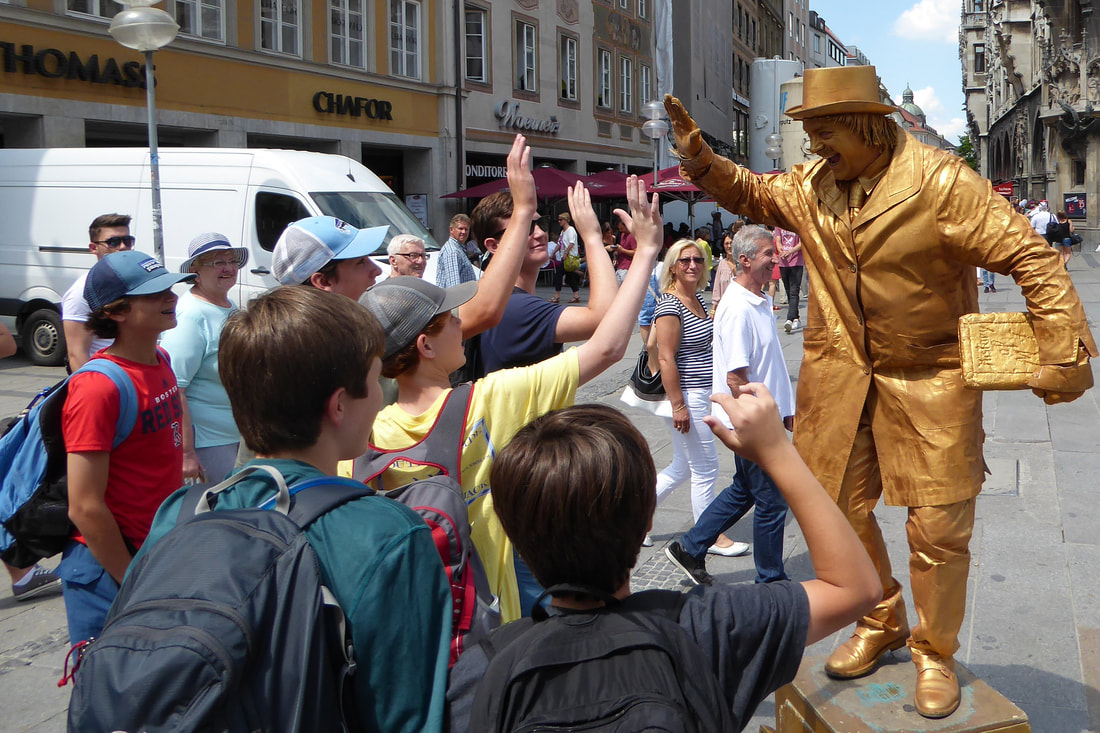 A street performer in Munich. 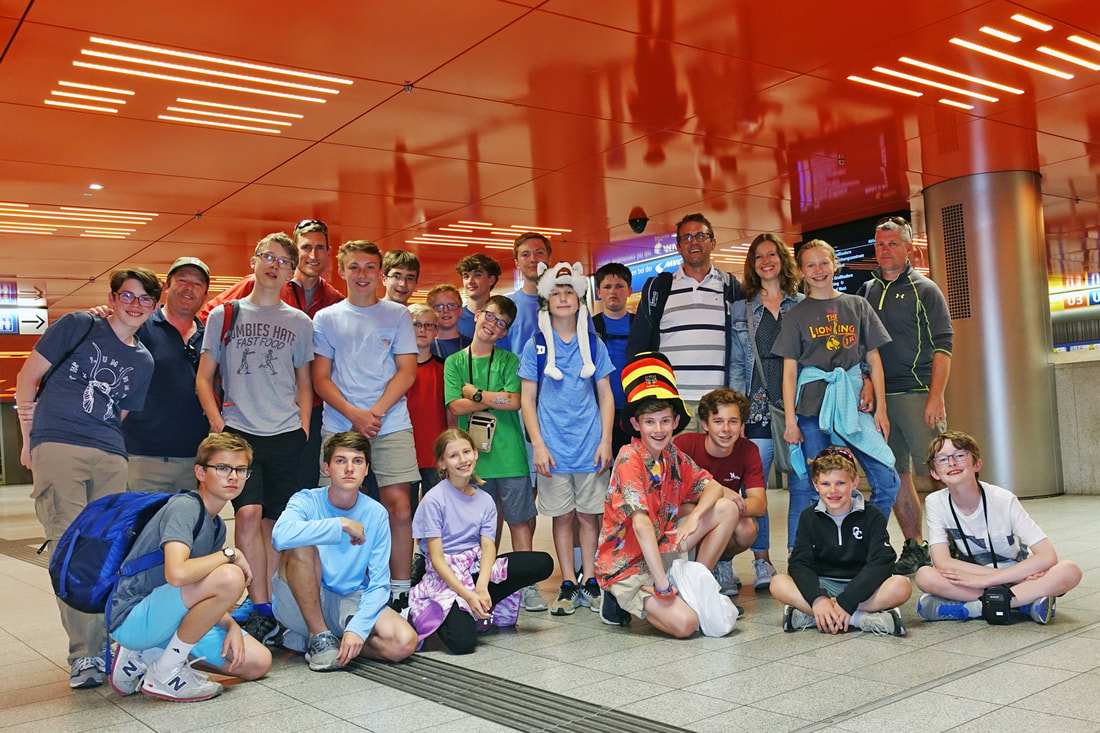 The group with the Kuhlmann family on our last trip. We'll hopefully spend time with them again on this trip. On our last trip we also met up with former school families in Amsterdam and in Berlin.